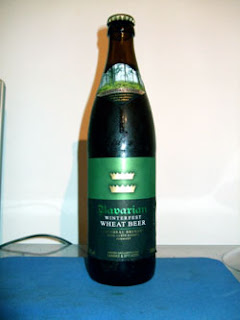 I set out this morning with high hopes for the day, but ended up surprised at just how quickly these can derail at the slightest knock.

Train in to work was late, meeting was delayed, then it took too long and ended with me inheriting a bulkier workload. That fairly put paid to the rest of the afternoon and gave me scant incentive to remain dynamic for the rest of the day. Tempted as I was to stick around longer, I made my excuses and left.

So having sought value at Marks & Spencer yesterday and more or less succeeded, I took the lazy option on my return home and decided to sample their wares again. Reader, I apologise. I've failed you by seeking neither value nor quality, but instead reaching apathetically into the fridge and pulling out the first beer that came to hand.

Now there are mitigating circumstances, admittedly. Long day, busy at work and home, stresses of Christmas, etc. But none of those excuses can go any way towards redeeming the brewer of this so-called 'Seasonal Guest' beer. The bottle is uninspiring, the colour is the visual equivalent of dank and it has the fearsome odour of solvent abuse. Only a couple of sips in and that particular guest has already outstayed its welcome and there are still more than 20 days left until Christmas. Leaves a sour taste in the mouth too, especially given the not-exactly-cheap price.

That said, the buggeration factor was minimal, which will of course help soften the blow when it comes to marking it down in the VFM stakes. But I won't be drinking this again. 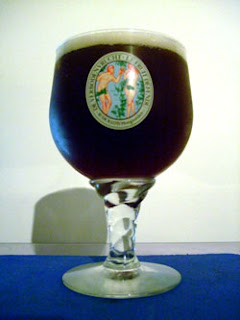 Beer: Bavarian Winterfest Wheat Beer
Country: Bavaria, Germany
Strength: 5.2%, but you wouldn't think it
Colour: Murky, pale, burnt umber
Smell: Paint and Quink Ink at first, disconcertingly. Then marker pen, then malt loaf and finally marker pen again.
Circumstance: Just played a 'Best of 2009' radio show on Purple Radio, which you can download from here if you like.
Tasting notes: There's a faint flavour of caramelised citrus fruit and a hint of dark, dried currants first off, but this is washed away almost instantly by a wave of sherbert and brackish water. Your poor tongue is left both reeling and floundering in this brine-like solution for some considerable time before that gives way to a mellower, warmer sensation. Much like being saved from drowning, I expect.
Drinkability: If you were thirsty and craved refreshment and you were presented with a bottle of this stuff, you'd rightly hesitate. It's not nasty by any means. No, it's too insipid for that. It just fails to hit the mark on several counts and is essentially disappointing.
Gut reaction: Windy. Wheat beer is fractious at the best of times, but this is downright volatile.
Session factor: Puny.
VFM: 4.5. It just doesn't cut it; certainly not at £1.62 a go. My advice is to spend your pennies elsewhere.
Posted by Eddie Grace at 22:18