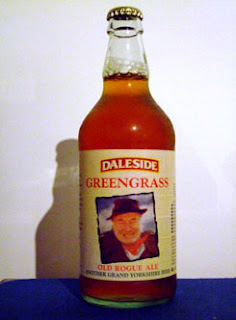 Money money money... root of all evil. A haunting refrain of Horace Andy's that rings ever more true in the run up to the festive period. Seems like every year the pressure grows to spend more, consume more, give more, receive more. It's a con that's even more obscene given the treacherous state of most people's and indeed countries' finances these days.

So we're shunning that this year at Beer Advent Calendar towers. Instead, we're going to be offering a taste of the low life for the next 24 days before we can sit, sated and with our feet up, reflecting on a more virtuous December than may have been the case in previous outings. Drinking responsibly, where the purse is concerned.

But while I may be compromising on price, I'll resist a total lurch downmarket taste-wise. There's no point me laying in 24 cans of Ace Lager in the name of thrift because I found it difficult enough to finish last year's calendar, which had both variety and expense going for it. So I'll be seeking value wherever possible and tipping you the nod when I find it. No one minds a bargain.

With that in mind, I'll be introducing a new measure - value for money. This metric will be calculated scientifically using a secret formula known only to me, but it will include such variables as price, strength, ease of purchase, flavour and buggeration footprint. An arbitrary score will be assigned to each beer, which you can discuss freely among yourselves without the faintest hope of changing my mind. 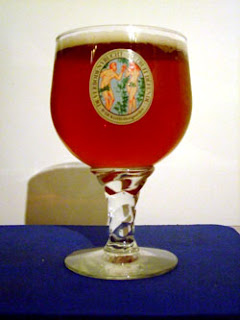 Beer: Daleside Greengrass 'Old Rogue' Ale
Country: Yorkshire, England
Strength: An ungenerous 4.5%. Typical bloody Yorkshireman (no offence)
Colour: Bog-standard amber*
Smell: Like good, honest, wholesome beer. Nowt fancy. Roasted malt if you really put me on the spot.
Circumstance: Watching the BBC videprinter of the Oldham Athletic v Leeds United game and not enjoying it. So I'm cracking open a bottle of beer that I had planned to give to a mate of mine as a present when I bought it in Pately Bridge in April. This hasn't happened and neither has my trip to the supermarket to stock the calendar up yet, so I'm setting about this one first.
Tasting notes: Feistier than I expected from a beer named after a character from the ITV Sunday evening mogadon that is Heartbeat. And cleaner too. Greengrass was played by the actor Bill Maynard, who also starred in the title roles of The Gaffer and Oh No, It's Selwyn Froggitt, all loveable rogues who were fairly tatty round the edges. The beer is slightly snappier dressed, although it still looks like it lives in those one-bedroomed conversion flats in the dark building near the fields that used to be a psychiatric home. And it certainly hasn't shaven in days. There's a terrific late taste of bitterness towards the finish that again points the finger at the kind of faded, broken failure tasted by Maynard's characters. But it retains its dignity throughout, an admirable quality as I'm sure you'll agree.
Drinkability: Hefty like Maynard.
Gut reaction: Becalmed. Presumably like the Boundary Park crowd at the time of drinking.
Session factor: Extremely good. It's taken mere minutes to polish this off.
VFM: 8. Pretty good if you consider I'm effectively nicking it. I think it was a couple of quid at the time, which is fairly pricey for a bottle of beer, but given that was some months ago, I could claim it's only set me back around 15 pence a month, which is just under half a pence a day. Bargain.

*Or even 'wine gum' orange, which is particularly apt given Bill Maynard named himself after the famous confectioner and wine gum purveyor.
Posted by Eddie Grace at 20:08

Who was the Heartbeat Beer intended for?

err... funny you should ask that, Mick.