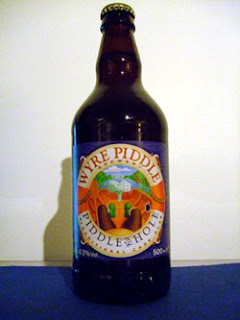 It's the same every year, so you'd think I'd have learned by now. But no.

Since my weekend trip to Morrison's, I've been out twice and consequently unable to even look at a beer the day after. So I've four to catch up with tonight, although given the hour I'll be lucky to get through half that.

I had such high hopes for this week as well, having planned to neck two on Sunday to make up for Monday's scheduled night out with clients while also hoping to be suitably recovered by last night to be back on track.

No such luck. On neither night out did I feel I'd had too much, but that was patently not the case when the evidence of the following day was scrutinised.

As bad luck would have it, I've another festive client entertainment evening tomorrow, so it's looking likely I'm going to have to work through a few on Friday as well.

It's a hard life.

Just the two tonight, though. Wouldn't want to overdo it, now, would I? 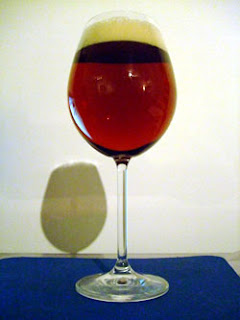 Beer: Wyre Piddle
Country: England
Strength: A ungenerous 4.0%
Colour: The ruby end of chestnut
Smell: A faint scent of wet pine forests and a large dose of spilled lager. There is some citrus fruit in there somewhere too.
Circumstance: Mistaking the light at the end of the work tunnel with the light of an oncoming train.
Tasting notes: More like a can of British Rail-issue 'bitter' than I've come across in the 16-odd years since it was privatised. It's sharp from the off and has a faintly metallic taste that's not unlike over-cooked spinach. There's not much in the way of body or spirit and the flavour drains away like disappointed football fans towards the end of a three-nil drubbing. That said, it's inoffensive, but it's more a beer-flavoured beverage than an actual beer.
Drinkability: Reasonable, but you'd need to be stuck on a pre-privatised train somewhere just south of Lichfield Trent Valley station to really appreciate it.
Gut reaction: I fear for my stomach as this one has both gas and vegetable water written all over it.
Session factor: Great if you're on a train. Not so good anywhere else.
VFM: 5.2. It was £1.25, so really not a huge sum, but it doesn't have much to say for itself either. 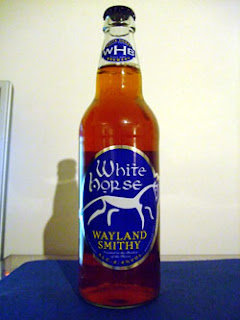 Beer: White Horse Wayland Smithy
Country: Oxfordshire, England
Strength: A fine 4.4%
Colour: Copper tun orange
Smell: The bastard lovechild of thick, treacly parkin and slovenly maltloaf. Covered in yeast and stinging nettles.
Circumstance: Watching True Blood and thinking about catching up further, although I am feeling bloated after the first one, so that's looking unlikely.
Tasting notes: Seriously hoppy and considerably more crisp and responsive than the last one. It has the attack of McVities Ginger Nuts and the same masochistically addictive quality too. It's hurting, but I want more. The bitterness stays with you long after you've swallowed and doesn't fade until several seconds later, by which time it has pulled up slightly. There's nothing too complex about it, either. A good straight-up-and-down ale that performs well over hurdles and isn't too shabby on the flat. 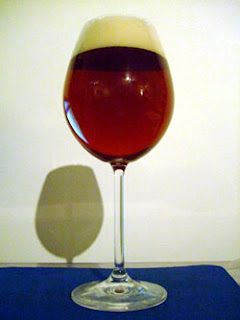 Drinkability: Good to soft. But schooning a few down while the dappled sun kisses the rolling summer meadows would be a firm favourite.
Gut reaction: I'm concerned the sizeable yeast element might give the innards a good shoeing later. Especially as I'm carrying a bit of extra weight.
Session factor: Middling. It's a bright, breezy effort, but I'm not sure I could handle it furlong (that's enough now - ed.)
VFM: 7.6. Another of Morrison's keenly priced ales, I'll gladly weigh in to a few more of these in the new year.
Posted by Eddie Grace at 20:39

Laugh out loud funny! You're a genius Ben.