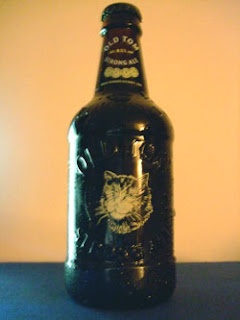 Go in with me: my duty cannot suffer.

Although suffer it has. I knew I should have done this last night. But through some clearly misguided sense of loyalty and desire for authenticity, I left it till today. I knew I'd be necking substandard wine this afternoon, so frankly this tasting should have been over and done with way before now.

But did that idea meet with any kind of acquiescence or approval when first mooted? I guess you can guess. But in the interests of and by way of marital harmony, such matters are insignificant, however you want to look at them.

So three or four sheets to the wind, I'm called on not only to deal with moody bus drivers and incredibly uptight offspring, I then need to pass judgment on one of the strongest beers I've seen on special offer in some time.

This is in the same ball park as asking the dog to take the cat for a walk.

On the plus side, it's Robinson's Old Tom, a beer with which I'm familiar. It's even a pleasure to reacquaint myself with a tipple first tasted in Marple and never since given a miss when possible.

It's ruddy hard, though. Literally. And it's colder than I'd have wanted, too. 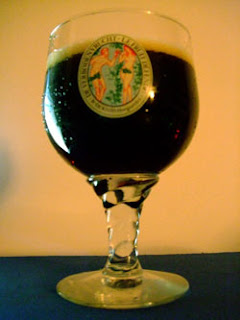 Beer: Robinson's Old Tom
Country: England
Strength: An ill-advised 8.5%
Colour: When held up at the light, it appears to be Benylin mixed with used engine oil
Smell: Thick molasses and just-baked malt loaf, laced with Russian vodka. And poppers.
Circumstance: Just back from a kids' party. Surprisingly low-key, thankfully. It's the third year in succession I've come back from the same party and had to both drink and review a beer, but you can tell the adults are getting older. And those without kids don't stay all that long. The result is, I'm overwhelmed neither by too much wine nor prone cigarette smoking. As misfortune would have it, though, my eldest wanted to know how a bottle opener works, so I had to let her open a beer I was planning to use for the calendar. Oh well, every cloud, as they say.
Tasting notes: Massive wallop of liquorice straight away. Hint of Marmite, soupcon of Supermalt and little respite for quite some time. It rounds after a while into something of a fortified wine, but you do have to wait for that. You almost have the impression that there's a little imp in the bottle armed with a miniature paint brush and and a pitcher of Marmite that he's eagerly applying to anywhere in your mouth that this stuff will stick. That said, I don't find it unpleasant at all. It's faintly reassuring, almost like a comfort blanket. A good couple of minutes later and it's still there. Reminds me of treacle toffee a bit.
Drinkability: Not something you'd really want to hammer, nonetheless this is a pleasure to take in. No hint of gaseousness, flavoursome and interesting; this beer practically demands you relax in an armchair, kick back in front of a fire and partake. Perhaps with a mature Stilton and a nicely loaded pipe.
Gut reaction: So long as you don't overload, there's not much that will trouble a reasonable constitution. In actual fact, it could well be prescribed for those of an unstable gastric disposition.
Session factor: Nah, I wouldn't. Although thinking about it, I wouldn't mind giving it a crack.
VFM: 9.3. Another £1.50-a-bottle contender and given its strength, it's already vying for the title of value beer of the month.
Posted by Eddie Grace at 20:55