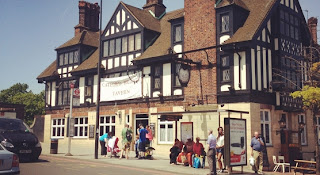 There's a weird netherworld that exists between the state of bliss that is contentedness and the cloying realisation that all is about to change irrevocably and forever.

It's the kind of thing I'm more used to at the arse end of a relationship, but there are some times - undoubtedly more important - when it feels like life as you know it will never be the same again. When there is really no going back. The precipice moment.

Regular readers of the calendar will be all too aware that, apart from a disastrous experiment last year that just didn't work, I will rarely post anything on the blog until at least the last week of November. But when the precipice moment arrives, as it did with the Wenlock Arms a couple of years ago, you're presented with the choice of letting go or taking a stand.

This is a precipice moment (and that's quite enough of that - ed.). Opened a mere eight months ago, the Catford Bridge Tavern - the greatest thing to happen to Catford since a few stray WWII bombs - is threatened with closure just as it was blossoming into a genuinely lovely place to while away the hours.

I've already reviewed it on the excellent Ransomnote site, so for a glowing paean to the pub, head over there. But sitting here, now, in the warming, welcoming orange of the gloaming, I'm reminded that nothing much that's good lasts forever.

And so it is with the Catford Bridge Tavern. The desperate, unseemly grubbing for cash that is modern property freeholdership means this breath of fresh air (thanks, smoking ban) is threatened with closure. Clearly suffering from a deficiency of money to either burn or roll around in, the building's landlord has put in for planning permission from Lewisham Council to turn the upstairs into flats and the downstairs into 'retail' space. It's probably not Tesco's, but it might as well be.

Now I'm not sure if you're familiar with Catford and its charms, but more retail it does not need. Hell, another batch of identikit converted pub flats it could do without too. It's a development that only makes sense in the minds of people who really don't care about the neighbourhood, the locals, the people who live here and, ultimately, the economic well-being of the area as a whole. Now I would usually spend time here delving into the socio-economic reasons why local pubs are the lifeblood of communities, etc., but anyone reading this will know about them by now. Besides, prefixing anything with socio-economic generally means what follows is liable to be about as interesting as watching recently painted grass grow.

What I will do, though, is point you in the direction of the online petition to try and save the place and urge you to email Lewisham Council with your objections to the proposal, reasoned or otherwise.

This proposal stinks. It stinks of unfettered capitalism, social neglect and poor taste. It's happening all over the country and the sub-human scum that proliferate this practise are getting away with it day after day. The only thing stopping them is organised and reasoned objection.