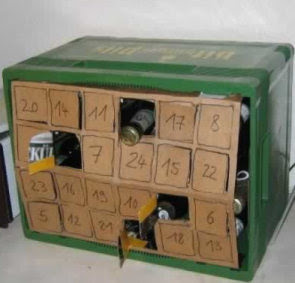 ... and the annual self-pickling event that is the Beer Advent Calendar is almost upon us.

Now in its third year, the Beer Advent Calendar is my way of bringing the festive season to life and spreading the joy of great beer among anyone who'll care to read. In addition, it's a great way of ensuring at least one beer a day during what is traditionally a stressful time, especially for those of us with young families who perhaps don't get enough sleep at night.

So what started out as a bit of a giggle inspired by the picture above has now become an institution. Literally tens of people have been waiting with bated breath for the arrival of December and the first flush of the opened ale.

Their wait is almost over. And this year, I've really pulled out all the stops. Randomness ruled the first attempt while an uncharacteristic and, quite frankly, weird sense of patriotic pride informed last year's Beer Advent Calendar. But this year, we look beyond this sceptred isle to the far flung outposts of brewing. Ales from America, beers from Belgium and lagers from the lowlands (OK, maybe not) populate my hop-filled festive feast in 2008, along with good old grog from Germany and even a smoky little snifter from Scotland, included as a nod to these shores.

Expect all the usual gubbins like colour, strength, aroma, tasting notes, circumstance (i.e. when I'm actually drinking it) and of course my personal recommendation of when it's best to sample each of the beers. Don't expect glowing reports if the beer's shit. And while I might luck out and be witty every now and then, it's best not to get your hopes up. Especially if I've had a few.

All that remains is for me to get busy with the camera, locate the bottle opener, polish the trusty beer glass and get tasting.

Well? I make it Dec 2nd which means at least one beer should have passed your lips and into review-based immortality?

(Given my history of patchy blog posting I should have no right to call for tasting notes being posted any time before January!)