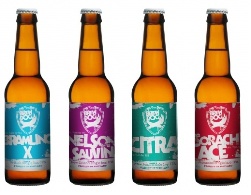 IPA is dead. Well it is if this is anything to go by. Deader than a festering dodo. Bereft of life. Gleich tot.

BrewDog's IPA is Dead is a monster of a 7.5% beer. They've brewed four different ones using a single variety of hop - Citra, Bramling Cross, Nelson Sauvin or Sorachi Ace - so you get to learn the distinct characteristics of each. Fine, laudable idea in theory. In practice, however, it's utterly disgusting. I have no idea which one it is I'm drinking, but have ruled out Citra or Nelson Sauvin by dint of the fact they couldn't possibly have made a beer this bad with either of those hops. Could they?

Fortunately, it's yet another 'limited edition' brew by the Fraserburgh-based publicity machine, so all is not lost.

The weird thing is, it smells terrific at first. Hoppy as a proverbial Mad March Hare on uppers; it has a wondrous flowery aroma.

But the thing with beer is... it's a drink. So eventually, you have to taste it. And when it tastes like a dead rabbit has just emptied its post-mortem bowels in a mortuary, you wonder whether tasting it really is the right option. Thank God I didn't order a pint of this crud. Oh, I did.

From the smell, you'd expect a finely crafted, subtly balanced hop maniac. Instead, what you get is 10-year-old Soreen malt loaf that throws spores of foetid mould around like its an explosion in a paint powder factory. And it hurts too. At 7.5%, it's no lightweight; rather it splays its dung-like flavour around like a 10-tonne muck-spreader, leaving rancid, hideous detritus strewn around the mouth indiscriminately.

And the trademark not-quite-there finish in which BrewDog seems to specialise rears its ugly head at the death too, just in case you hadn't had enough of an assault on the senses. Disgusting.

The tide is turning against them.

As all tides must.

Not before time, IMO.